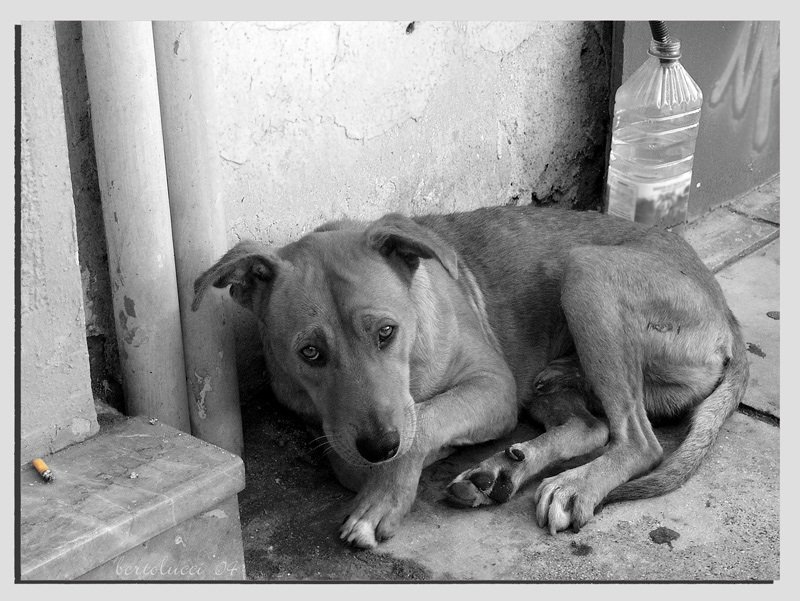 Learned helplessness is an acquired sense that you can no longer control your environment—so you quit trying to.

The classic experiment involves two groups of dogs. Call them groups A and B. Both groups receive strong electric shocks while strapped into a hammock.

Group A dogs can turn the shock off by pushing a panel with their little doggie snouts. They can do this anytime after the shock begins.

Each dog in Group B is “yoked” to a dog in group A—meaning that whenever the Group A dog is shocked, so is the corresponding Group B dog, and whenever the Group A dog turns off its shock, the shock is also turned off for the corresponding Group B dog. This is an elegant way of (1) ensuring that the dogs in the two groups receive exactly the same number of shocks and for the same duration, at the same time as (2) putting Group B dogs in a situation where they had no power to control their environment. For Group B dogs, the shocks seems inescapable, even though the actual physical punishment meted out to the two groups is identical.

The crux of this experiment is learning. The key question is, in a new situation where the dogs can actually help themselves, will the dogs who were able to exercise control over their circumstances learn differently compared to dogs who simply had to endure the shocks?

To test this, dogs from both groups are put in a “shuttle box,” and then presented with a conditioned stimulus (e.g. a bell) 10 seconds before the floor becomes electrified. The shuttle box has a barrier the dog can jump over, and the other side is not electrified. This is actually a standard avoidance learning task. In this task, learning can be quantified by measuring the number of seconds it takes for the dog to jump, over a period of 10 or so trials. If the dog jumps within 10 seconds of hearing the bell, it avoids the shock altogether. If it fails to jump after 60 seconds of shocking, the electricity is turned off. Let me emphasize: to avoid the shock, all the dog has to do is jump over the barrier. 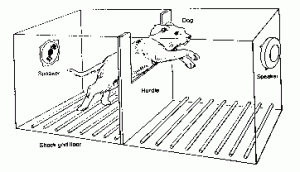 For purposes of comparison, we look at dogs that have no experimental experience (Group C). As you would expect, fresh “naive” dogs hear the bell, do nothing, get shocked, and within a few seconds, scramble over the hurdle. After a couple of trials, they learn to associate the bell with the shock (classical conditioning), and they jump well before their grace period is up, thus entirely avoiding the shock.

Group A dogs learn just about as quickly as naive dogs to avoid the shock.

Here’s the interesting finding. Group B dogs, the ones who have experienced inescapable shock in the hammock, react passively. They do not look for an escape. “They lay down, whined quietly, and simply took whatever shocks were delivered. They neither avoided nor escaped; they just gave up trying.”

Why do the Group B dogs give up? Because they are conditioned to feel helpless. In the first condition, they had no control over the shocks they were getting—so they gave up trying, not just in that situation, but in all situations. Even when they’re placed in a new situation—one in which they actually have control over their fate—they don’t realize it because they don’t even look for an escape. Even after repeated trials, the Group B dogs never ever discover that they can avoid the shock simply by jumping over the hurdle.

Like the Group B dogs, many people who are depressed exhibit learned helplessness, says Martin Seligman, the University of Pennsylvania psychologist who led the experiments. Such people are passive and fail to act or take initiative because they feel like their acts are futile. Often, the person has been through an experience where she was objectively helpless in the face of personal loss, professional failure, or illness. Now, the person’s depression stems from a sense of hopelessness, a sense that she is a passive victim with no control over life’s events, that her actions are futile—i.e. that she’s helpless. Other studies have shown that learned helplessness impairs the immune system, and that “giving up hope” has negative health effects.

The good news is that learned helplessness can be unlearned: “We dragged those poor, reluctant animals back and forth across the shuttlebox over the barrier and back again, until they began to move under their own steam and came to see that their own actions worked. Once they did, the cure was one hundred percent reliable and permanent.”