As a British commando in the Special Air Services, John Geddes fought missions in the Falkland Islands and ran undercover ops in Northern Ireland and Bosnia. Unable to leave the action behind, he then became a soldier-for-hire, protecting American and British media crews from hostile insurgents in Iraq. He now teaches private military contractors, bodyguards, and journalists the skills they need to survive in a war zone. —Jay Dixit 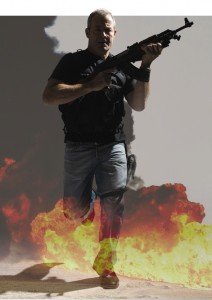 What draws you to this? The adventure? The money?
Both. It’s the camaraderie you miss from that military background. It’s mainly the adrenaline and the high adventure.

What’s the transition to civilian life like?
Civilians don’t understand what I’ve seen and done.

What is it that people don’t understand?
Why you risk your life in the military in the first place, and once you get away with it, at least physically, why go do it again and possibly become even more psychologically damaged than you already are.

Psychologically damaged?
Friends of mine have committed suicide from post-traumatic stress. I used to dream—between dreams and nightmares. Teeth grinding. Strangely, what balances you is more trauma and more adrenaline; working in a dangerous place again has more of a calming effect then anything else. It’s a bit of a fix. It’s like Apocalypse Now. When you’re in the jungle all you can think of is home, and when you’re home all you can think of is getting back in the jungle.

Have you dealt with depression too?
I’ve suffered more from survivor’s guilt. I’ve been to over 50 funerals.

What’s it like for your wife?
My wife is a stroke specialist. She sees a lot of death on a daily basis herself. Soldiers, nurses, firefighters, policemen, they share a bond of being on the front lines, that camaraderie. She gets my gallows humor.

Are you afraid of dying?
When I was in Iraq my nightmare was not getting killed but getting captured. I worry about my reputation. How’s it going to look if I lose my client? If I’m captured and wind up on national TV in an orange boiler suit, how embarrassing would that be? So you have to fight to the death. There’s no way I would have been captured alive.

Ever been in a situation you didn’t know how to get out of?
Getting divorced after my first marriage. I’ve never felt so lost in all my life. I was fortunate to find another woman who took the brunt of the rehabilitation.

Can you sense when danger is imminent?
You develop a sixth sense. You pick up on combat indicators—changes of atmosphere. On the road from Jordan to Baghdad, I saw this vehicle in the rearview mirror and immediately knew something was going to happen. They fired a volley of AK rounds in an attempt to pull us over. So I fired from the inside the car, straight through my own door to preserve the element of surprise. From three feet, a burst of automatic fire, armor-piercing rounds, someone’s going to get hurt.

What did you feel at that moment?
A slight pressure on my trigger finger. Sorry, gallows humor.

How did it feel to kill someone?
It’s adrenaline, a little bit of shame. It’s not a natural thing to kill somebody. You never get used to it. But mostly it’s being thankful it wasn’t you and exhilaration that you got away with it again.

A longer version of this interview is available here.